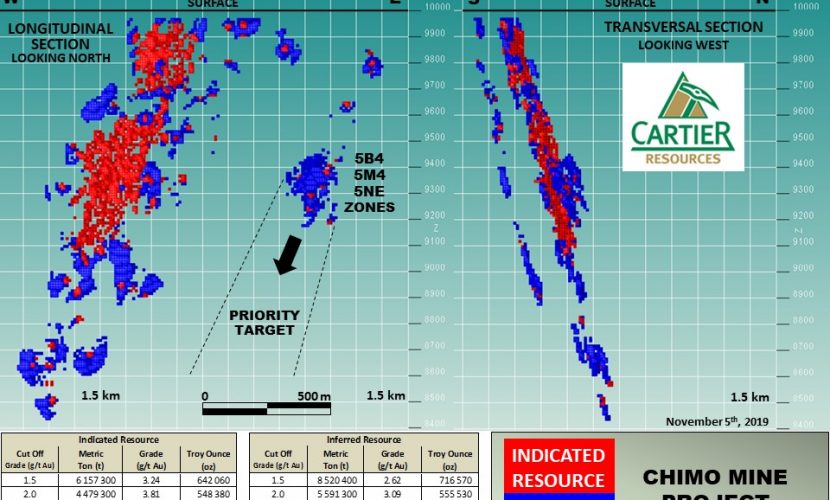 Val-d’Or, November 5th, 2019 – Cartier Resources Inc. (TSX-V: ECR) (“Cartier”)
Announces the results of the mineral resource estimate of the Central Gold Corridor of the Chimo Mine property, located 45 km east of Val-d’Or. The estimate, completed and made available on November 4th, 2019, was prepared by Mr. Christian D’Amours, P. Geo., B. A. Sc. from GeoPointCom Inc., an independent Qualified Person as defined by NI 43-101.

” These resources, with existing underground infrastructure, are key elements of the Company’s short-term growth strategy,” commented Philippe Cloutier, President and Chief Executive Officer, adding that ” this represents only a portion of the potential of the Chimo Mine property. The resource estimates for the North and South Gold Corridors are in progress and are in addition to, the potential that can be outlined via drilling soon to be launched below Zones 5B4-5M4-5NE, which reported excellent results last June. ”

The table of the sensitivity of the cut-off grade on the gold resources (FIGURE 1) is presented below:

The table above illustrates the sensitivity of this mineral resource estimate to different cut-off grades for an underground operation scenario with reasonable outlook for economic extraction. The reader is cautioned that the figures provided in this table should not be interpreted as a statement on mineral resources. Quantities and estimated grades for different cut-off grades are presented for the sole purpose of demonstrating the sensitivity of the resource model to the choice of a specific cut-off grade.

Zones 5B4-5M4-5NE, recently developed and particularly through the excellent results  of June 2019, have led to the development of new resources in the eastern part of the property. This new area, with strong discovery potential under Zones 5B4 – 5M4 – 5NE (FIGURE 1), will be drilled again starting November 20th, 2019.

The scientific and technical information of the Company and the Chimo Mine Project, included in this news release, have been prepared and reviewed by MM. Gaétan Lavallière, P. Geo., Ph.D., Vice President and Ronan Déroff, P.Geo, M.Sc., Senior Geologist, Project Manager and Geomatician, Qualified Persons as defined by NI 43-101. Mr. Lavallière approved the information contained in the press release.

The independent qualified person for the issuer, responsible for the estimation of mineral resources, as defined in NI 43-101, is Mr. Christian D’Amours, P. Geo., B. A. Sc., President of GeoPointCom. Mr. D’Amours declares that he has read this press release and that the scientific and technical information relating to the estimate of the resources presented herein is compliant.

The analytical results, derived from Cartier’s drilling, were obtained from samples measured along the drill core. The estimated true thickness averages about 65% of the measured apparent length. NQ core samples are crushed up to 80% passing an 8 mesh and then pulverized up to 90% passing a mesh of 200 mesh. Cartier inserts 5% of the number of samples in the form of certified standards and another 5% in the form of blank samples to ensure quality control. The samples are analyzed at the Techni-Lab laboratory (Actlabs), located in Ste-Germaine-Boulé (Quebec). The 50 g pulps are analyzed by fire assay and read by atomic absorption, followed by gravimetry for results above 5.0 g/t Au. For samples containing visible gold, 1000 g of rock are analyzed by the ” Metallic Sieve ” method.

Cartier Resources Inc., founded in 2006, is based in Val-d’Or, Quebec. The province has consistently ranked as one of the best mining jurisdictions in the world, primarily because of its favorable geology, attractive fiscal environment and pro-mining government. In 2019, the Fraser Institute ranked Quebec the fourth best in the world in terms of attractiveness for mining investments.