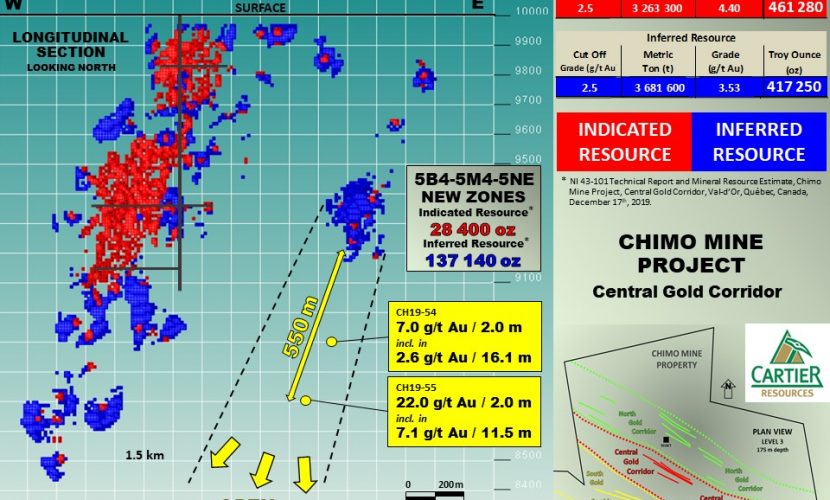 Cartier Intersects 7.1 g/t Au over 11.5 m 550 m Below Zones 5B4-5M4-5NE on Chimo Mine Project; Illustrating the Potential for Resource Expansion

Values ​​of 7.0 g / t Au over 2.0 m, included within a section grading 2.6 g / t Au over 16.1 m, were also obtained 300 m below Zones 5B4-5M4-5NE (FIGURE 1). The continuity of mineralization makes it possible to plan drill targets over long distances and repeat the intersections.

“The potential for resource expansion is open in all directions below the new Zones 5B4-5M4-5NE, testifying to the importance of the mineralized system and its continuity” commented Philippe Cloutier, President and Chief Executive Officer.

The details of the new results are as follows:

Work on expanding resources of the Chimo Mine Project is in progress underway via:

About Chimo Mine Project

The scientific and technical information of the Company and the Chimo Mine Project, included in this news release, have been prepared and reviewed by MM. Gaétan Lavallière, P.Geo., Ph.D., Vice President and Ronan Déroff, P.Geo, M.Sc., Senior Geologist, Project Manager and Geomatician, Qualified Persons as defined by NI 43-101. Mr. Lavallière approved the information contained in the press release.