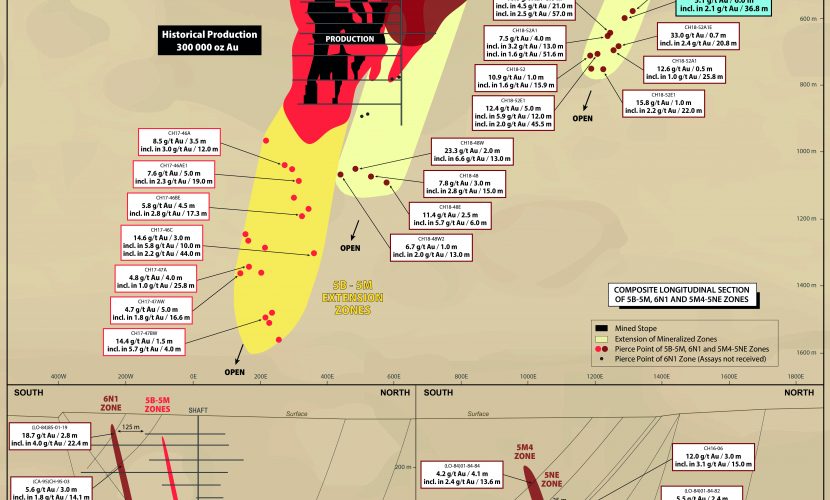 An intersection grading 3.7 g/t Au over 5.0 m included within a broader section of 26.2 m grading 1.8 g/t Au, were also obtained within Zone 5M4. The new results, which are situated at a depth of 600 m, are in addition to other mineralized intersections recently reported by Cartier (FIGURE) and within a 100-m radius of the new results. The potential of this area is open laterally and at depth. Zone 5M4 is located only 25 m from the 5NE Zone and 450 m from the existing underground infrastructure at this depth (FIGURE).

« The first part of the Phase III drilling, which will begin at the end of February 2019, will be concentrated peripheral to the recent results obtained from Zones 5M4 and 5NE» commented Philippe Cloutier, President and CEO.

Lengths are expressed along drill core axis.  The true thickness was not determined.

The Phase II drill program which will be completed by the end of February 2019, will have upgraded the peripheral gold zones to the main Zone 5B and 5M cluster at depths between 600 m and 1.1 km in addition to discovering Zone 5NE.

The reader should view the YouTube VIDEO, available on Cartier’s website.  The 3D video helps visualize the different gold-bearing structures on the Chimo Mine property as well as key components that are the mine infrastructures, the gold-bearing zones, the gold intersection areas left unmined as well as the main targets of the ongoing drill program.

Cartier Resources was founded in 2006 and is based out of Val-d’Or, Quebec.  Quebec has consistently ranked high as one of the best mining jurisdictions in the world primarily based on its mineral rich geology, attractive tax environment, and pro-mining government.  In 2017, the Fraser Institute again ranked Quebec as one of the best jurisdictions in the world for investment attractiveness.