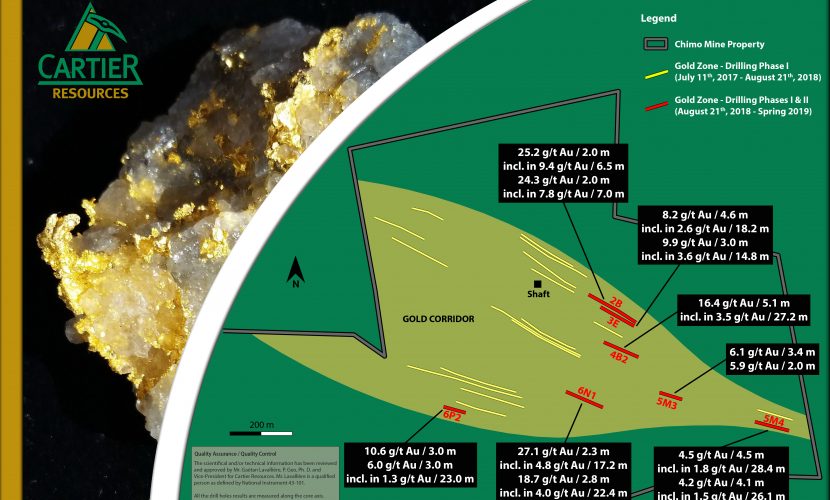 Cartier President and CEO Philippe Cloutier says the Chimo Mine project Phase II drill program, which began on August 22nd, has been expanded by an additional 40 holes totalling 13,000 m, to a total of 105 drill holes for a total of 45,000 m.

« Results from Phase I drilling has led our team to design a Phase II program focussed on mineralization that we believe is the tipping point for the Chimo Mine project» commented Philippe Cloutier, President and CEO of Cartier.

« Additional drilling on newly discovered gold mineralization proximal to the shaft is a game changer for the project».  Cartier has a strong balance sheet with over $10 million on hand and a robust new program that continues to add value at the Chimo Mine project.

Phase II drilling is designed to verify, between 600 m and 1000 m depth, continuity of mineralization in 7 of the 23 gold zones currently with the greatest potential for increasing project gold resource (FIGURE).  Phase II of the drilling program is expected to continue until spring 2019.

Phase I of the drilling program, which began on July 11, 2017, was completed on August 21, 2018. This phase, consisting of 66 holes totaling 32,000 m, explored the extensions of the 23 gold zones on the property. Two deep boreholes totaling 10,000 m intersected 18 times the cluster of 4 main gold zones between 950 m and 1,525 m depth; in the extension of the sites of the former Chimo mine. Another 22,000 m was drilled at shallower depths exploring the extensions of the 19 peripheral gold zones at the main sites of the old mine.  Note that there are over 3,500 samples (30%), from Phase I drilling pending at this date.

The reader should view the 3D VIDEO, available on Cartier’s website.  The 3D video helps visualize the different gold-bearing structures on the Chimo Mine property as well as key components that are the mine infrastructures, the gold-bearing zones, the gold intersection areas left unmined as well as the 281 targets of the ongoing drill program.

Cartier Resources was founded in 2006 and is based out of Val-d’Or, Quebec.  Quebec has consistently ranked high as one of the best mining jurisdictions in the world primarily based on its mineral rich geology, attractive tax environment, and pro-mining government.  In 2017, the Fraser Institute again ranked Quebec as one of the best jurisdictions in the world for investment attractiveness.

All lengths, mentioned in this press release, were measured along the drill core. The NQ core samples are crushed up to 80% passing 8 mesh sieves and then pulverized up to 90% passing a 200-mesh sieve. Cartier inserts 5% of the number of samples in the form of certified standards and another 5% in the form of sterile samples to ensure quality control. The samples are analyzed at the Techni-Lab laboratory (Actlabs), located in Ste-Germaine-Boulé, Quebec. The 50 g pulps are analyzed by fire assay and atomic absorption. For samples containing visible gold, 1000 g of rock are directly analyzed by the “Metallic Sieve” method.