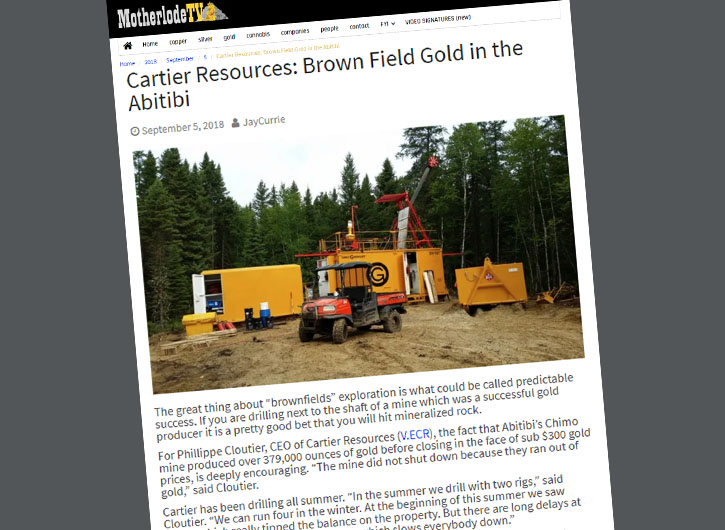 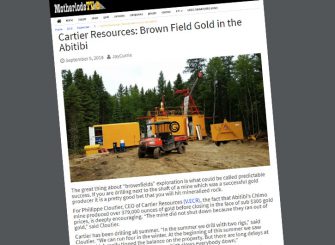 The great thing about “brownfields” exploration is what could be called predictable success. If you are drilling next to the shaft of a mine which was a successful gold producer it is a pretty good bet that you will hit mineralized rock.

For Phillippe Cloutier, CEO of Cartier Resources (V.ECR), the fact that Abitibi’s Chimo mine produced over 379,000 ounces of gold before closing in the face of sub $300 gold prices, is deeply encouraging. “The mine did not shut down because they ran out of gold,” said Cloutier.

Cartier has been drilling all summer. “In the summer we drill with two rigs,” said Cloutier. “We can run four in the winter. At the beginning of this summer we saw things which really tipped the balance on the property. But there are long delays at the lab as well as a lack of a workforce which slows everybody down.”

“Because Chimo is a past producer we have a wealth of legacy data,” said Cloutier. “We have precise information about the plunge of the ore shoots. So, we have been exploring some of the old zones of mineralization. We operate rather like an exploration crew at an operating mine.”

“In Phase 1 we were drilling deeper than the deepest level of the shaft. None of the zones had been drilled below the bottom of the shaft. We also had two machines which were drilling holes which circumnavigated the shaft,” said Cloutier. “Ounces proximal to the shaft have a much greater near-term value than ounces further away and even deeper ounces.”

“We were also drilling targets a few hundred meters to the south of the shaft,” said Cloutier. “We see this as a new discovery zone. There was a pocket of mineralization near the surface and another pocket 500 meters down. We drilled between the two pockets. The assays are not back yet but we saw similar rock all the way down. And we extended the deep holes and we are confident that the new zone extends to depths exceeding 1500 meters.”

All of which led to the company’s June 28th, 2018 press release in which the company indicated that it had hit 1.5 meters of 86.1 gpt gold as well as several other very encouraging intervals.

Those results, plus the anticipated results from core still at the lab, convinced the Cartier team that Phase 2 of the drilling program needed to go ahead. “We’re looking at a total of 13,000 meters in 40 drill holes,” said Cloutier. “We’ll be drilling seven of the twenty three identified gold zones. What we are looking for are “near term” ounces.”

Here is where the strength of brown fields exploration becomes obvious. As well as the legacy data Cartier has from prior operators, it also has the main shaft and the workings of the old mine. These are filled with water at the moment, but the cost of dewatering and rehabilitating is a fraction of the cost of sinking a new shaft estimated to be close to 100 million dollars.

“The retail market is pretty indifferent to brown fields stories,” said Cloutier. “But the fact is that the shaft itself is worth millions of dollars. Ore could be sent to one of the several custom mills which are in easy trucking distance. Which means restarting Chimo will have minimal environmental impact and in turn minimal permitting issues.”

The drills for the Phase 2 drilling are already deployed. “The program will run until March of 2019,” said Cloutier. “But by October or November of 2018 it should be pretty obvious where Phase 2 is going.”

Cloutier allows that Cartier work is  maiden 43-101 resource estimate stuff. “We’re looking for new ounces to add to the ounces left by the previous operators,” said Cloutier. “But you know that the first 43-101 number is the one people remember. So, you don’t want to do it too early.”

While the retail market may not love brown field developments, senior mining companies pay close attention. Senior miners know that the technology and methods used to bring a mine back into production have improved substantially in the last twenty years. They also are well aware that the permitting issues for a brown field mine are minimal compared to a brand new green field operation.

“Seniors like to see at least one million ounces,” said Cloutier. But where those ounces are, what sort of mine workings are available, what the infrastructure is and whether there is a workforce nearby are all factors which are loaded on top of a pure resource calculation.

All of which has not been lost on Agnico Eagle which has a significant investment in Cartier. “We talk to people at Agnico regularly. They have great ideas and a lot of experience in the Abitibi.”

Exploring its brown field property at Chimo is a bit of a balancing act for Cloutier. “You want to be working for your shareholders and not the eventual owner,” said Cloutier. The more drilling Cartier does the more it derisks and therefore increases the value of the Chimo mine. With the current, depressed, junior resource market that increase in value is not being reflected in the price of Cartier’s shares. Which frustrates Cloutier, “You need a strong share price.”

There is every chance that Cartier will see an improving share price over the next few months. The price of gold seems to be firming, the junior market is showing signs of life and Cartier is awaiting the results of the numerous assays which are backed up at the lab. News from those assays will come out in the next few weeks and then there will be news from the Phase 2 drill program. 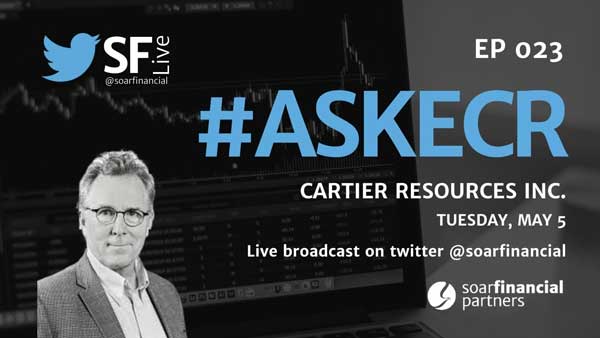 On May 5, 2020, Philippe Cloutier, President & CEO of Cartier Resources, spoke with Kai Hoffmann , CEO of Soar Financial Group on SF Live. Philippe gives an update on… 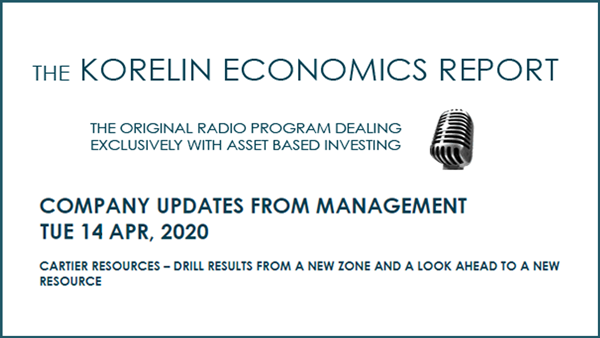 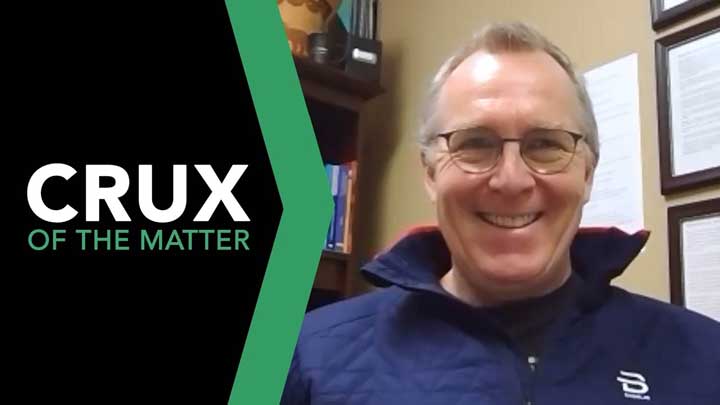 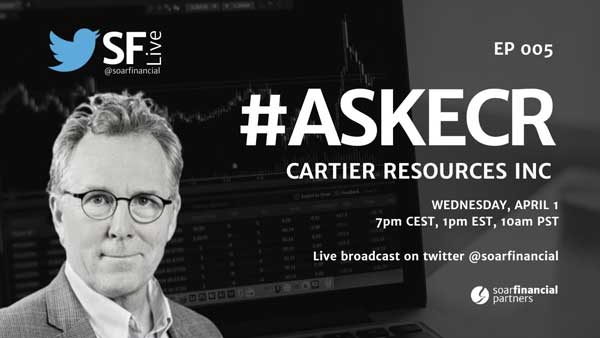 READY TO INVEST WITH US?

Nothing simpler, just a few clicks!