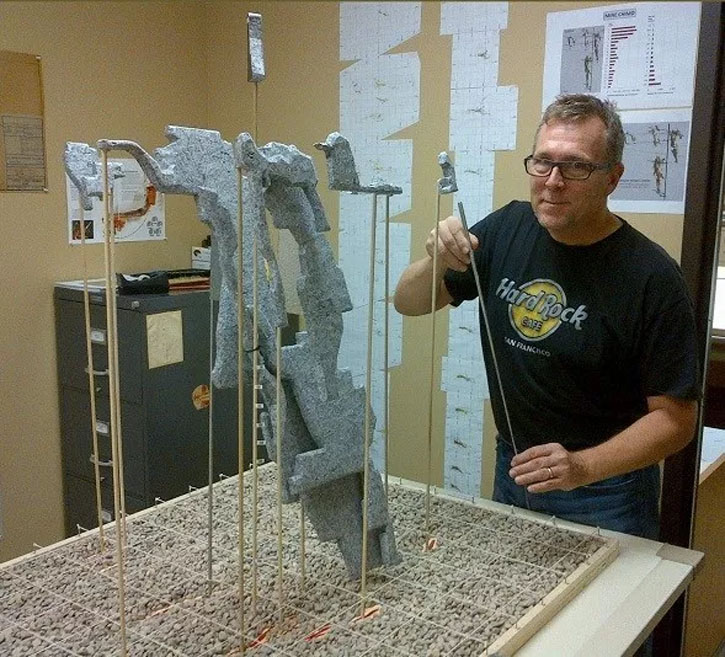 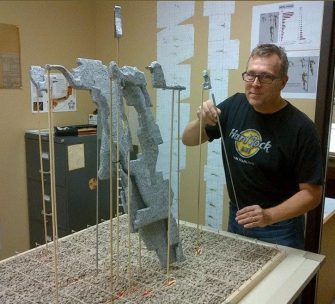 The Abitibi region in Quebec is filled with gold mines both currently producing and shut down. For Philippe Cloutier, President and CEO of Cartier Resources (V.ECR) a closed mine is a huge opportunity.

“We’re drilling at the Chimo Mine near Val d’Or at the eastern end of the Cadillac fault,” said Cloutier speaking to us from the New Orleans Investment Conference, “The Chimo mine was a past producer which was shut down in 1997 when gold was below $300 an ounce. It produced 379, 012 ounces of gold.”

The low gold prices of the late 1990’s meant mines which still had plenty of gold ore were shut because their operating costs were higher than the value of the gold they produced. A situation which obviously changes as the price of gold goes up.

“We’re drilling in the vicinity of the mine shaft,” said Cloutier. “The shaft itself goes down 920 meters and, at the moment, it is flooded. In 1997 the workings extended to 870 meters. Our drilling is low risk. What we are seeing is a look alike of the principle mining zone.”

Initially, in 2016, Cartier drilled holes in the main gold-bearing 5M zone up to 700 meters east of the shaft. Mineralization was encountered and “Visible gold grains were observed in three (3) structures over drill core lengths ranging from 0.2 to 1.7 meters.”

Following up on this encouraging result, Cartier is running a 25,000 meter drilling program. In the press release announcing this program Cloutier is quoted as saying, “The Chimo Mine property straddles the prolific Larder Lake-Cadillac fault, a major regional structure that has produced over 100 million ounces of gold.” So Cartier is guided in its program by the historical results which it has access to. It recently drilled down to 500 meters.

In this release Cloutier commented, “These results double the potential volume of the 5M4 Zone in this area, mineralization now extends to a depth of 500 meters additional drilling is planned to further increase the size of this zone”.

The one thing which seems to be true of the Abitibi is that its gold structures continue at depth. Cartier is bringing in a second drill rig to go deeper. “The main vector seems to continue the mine at depth.” Which means more drilling at depth but also lateral drilling to look at the extensions of the deposit.

“By mid-2018,” said Cloutier, “I think people will understand that this mine could potentially go back into production.”

That understanding, the realization that Chimo could produce gold again, will be pushed forward by what Cloutier anticipates will be lots of drill results. “We should have a steady news flow. Every second or third week for 6 to 12 months.”

As that news comes out more people will take a look at what else Cartier has at Chimo. “We have all the historic records,” said Cloutier. “We know the rock mechanics and we are drilling to define the extensions of the deposit.”

“In terms of infrastructure we are in the heart of one of Canada’s great mining districts, where proximity to workforce, power and transportation helps to build a mine,” said Cloutier.

“We could conduct a resource estimate right now. But we are sponsored by Agnico-Eagle (which owns 19.9% of Cartier) and we don’t want to do the estimate early with a “small number,” said Cloutier. “Why produce a number which will only cap the blue sky on the project especially when we see that the number will grow?”

With Agnico-Eagle already a participant, Cartier has had interest from several other larger companies. “We have NDAs out. With an NDA in place a senior company gets access to our 4000 diamond drill hole historical database. The historical work has been digitalized and we have a digital model of the deposit,” said Cloutier.

“We’re beginning to attract attention. We are getting some analyst coverage,” said Cloutier.

Cartier is in the happy position of having $13 million dollars in the bank to finance its drill programs. And, as its press release on November 2, 2017 points out, Chimo is not Cartier’s only property. The company is deploying two drills to run a 7000 meter program at its Fenton property, 50 kilometres north of Osisko’s Windfall Lake project. Clothier is quoted in that release as saying, “The Fenton property is situated 50 km north of the Windfall Lake gold deposit and 50 km east of the Bachelor Mine. This drill program aims at increasing the potential of the project in an area already known as being favourable.”

Having a multi-property, multi-drill strategy, excellent infrastructure, Agnico-Eagle sponsorship and money in the bank puts Cartier in an ideal position to benefit from a rising gold price. The fact its properties are located in mining friendly Quebec and are eligible for flow-through tax credits and other, Quebec only, partnerships and incentives, makes Cartier all the more attractive.

READY TO INVEST WITH US?

Nothing simpler, just a few clicks!