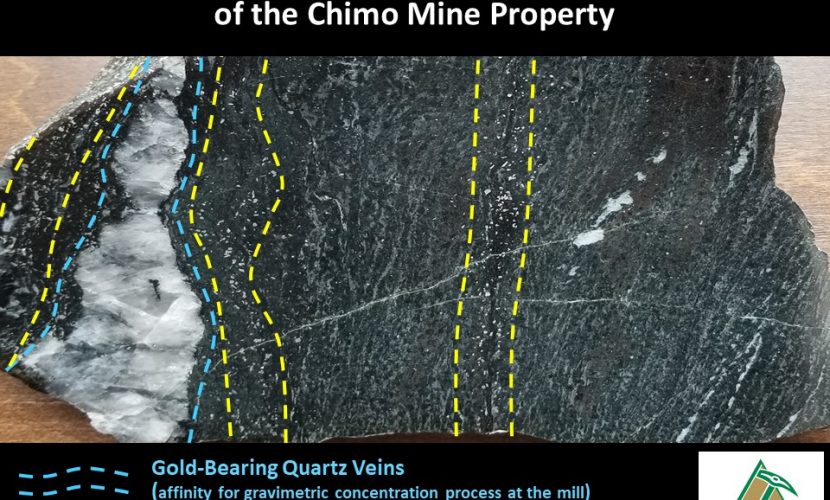 Val-d’Or, April 8th 2021 – Cartier Resources Inc. (TSX-V: ECR) (“Cartier”) announces the results industrial sorting tests of mineralisation representative for the Chimo Mine property, located 45 km east of Val-d’Or.  The tests were carried out by two laboratories:  Corem in Quebec (Canada) and Steinert US in Kentucky (USA).

Gold from the Mine Chimo property is present in two types of mineralised facies (FIGURE) either : i) quartz veins with coarse visible gold grains having an affinity for the gravity concentration of gold at the mill and ii) zones of silica-rich mafic rocks associated with non-refractory arsenopyrite having an affinity for the flotation of a concentrate of arsenopyrite for gold recovery at the mill.  To perform the sorting tests, rocks representative of the 2 mineralised facies, made up of the following 6 mineralogical facies, were first selected for static recognition of each of the facies by the sensors of the sorter:

The detection sensors of the industrial sorter are the RGB camera using the optical properties of reflection, brightness and transparency to locate quartz and silica and the XRT sensor using the volumetric property of atomic density to locate arsenopyrite.  The 2 sensors adequately recognizing the 6 mineralogical facies associated with the mineralisation, dynamic calibration tests of the sorter with the moving conveyor made it possible to sort, one at a time, 2 kg samples of each of the facies.

The sensor recognition tests having been successful, a calibration sample composed of a fraction of each of the mineralogical facies, was then constituted in order to verify the efficiency of the calibration of the sorter for the Chimo Mine project mineralisation.  This sorting test is composed of a mixture of the 6 mineralogical facies, mentioned above, in proportions representative of the Chimo Mine project mineralisation.  The results of this first test show that the first 3 sorts (on a total of 8 sorts) concentrated 99.1 % of the gold contained in 44.4 % by mass of material mass for a grade of 56.3 g/t Au representing a percentage increase of 223 % in gold content over sorter feed.  The reject, representing 0.9 % by mass of material, contains only 0.40 g/t Au.

Sorting tests, carried out with Steinert in Kentucky (USA), yielded comparable results.  An 80.69 kg production sample, representative of the mineralised facies at an average grade of 2.13 g/t Au, to which 20 % by mass of material at zero grade of gold was added mathematically, representing the dilution in the workings, was used for testing.  The new grade thus diluted is now 1.55 g/t Au.  Calculation of the results reveals that 51.0 % by mass of the dilute grade material could be separated as a preconcentrate at an average grade of 2.72 g/t Au representing a 175 % increase in gold grade compared to the sorter feed.  The waste disposal, which would thus be separated from the mineralisation, would represent 49.0 % by mass of material at an average grade of 0.36 g/t Au.  Sorting tests with Corem were carried out following these tests to validate that the 20 % of dilution material at zero grade of gold, mathematically added, could physically be effectively separated by the sorter.  The results obtained by Corem are positive and of the same order of magnitude as those of Steinert US.

Highlights of Chimo Mine Project

Cartier Resources Inc., founded in 2006, is based in Val-d’Or, Quebec. This province has consistently ranked as one of the world’s best mining jurisdictions, primarily because of its favourable geology, attractive fiscal environment and pro-mining government.

The analytical results, from Cartier drill holes, were obtained from NQ-caliber core samples crushed up to 80 % passing a 10 mesh (2.00 mm) mesh then pulverized up to 90 % passing a mesh of 200 mesh (0.07 mm).  Cartier inserts 5 % of the number of samples as certified standards and another 5 % as sterile samples to ensure quality control.  Samples are analyzed at Techni-Lab (Actlabs), located in Ste-Germaine-Boulé, Quebec.  The 50 g pulps are analyzed by fire assay and read by atomic absorption.  If i) the result is ≥ 1.0 g/t and <10.0 g/t, a second pulp is analyzed and read by atomic absorption and if ii) the result ≥ 10.0 g/t, the second measurement is performed by gravimetry.  For samples containing visible gold, 500 g of rock pulverized up to 90 % passing a 140 mesh (0.11 mm) mesh is analyzed by the ” Metallic Sieve ” method.

The scientific and technical information on the Company and the Chimo Mine Project in this news release was prepared and reviewed by Mr. Gaétan Lavallière, P. Geo., Ph. D, Cartier’s Vice- President, and Mr. Ronan Déroff, P. Geo, M. Sc., Cartier’s Senior Geologist, Project Manager and Geomatician, both qualified persons as defined in NI 43-101.  Mr. Lavallière approved the information contained in this press release.

Corem is a center of expertise in research and innovation, established in Quebec, which specializes in the processing of minerals. Using its state-of-the-art facilities, Corem has, for more than 20 years, offered services in the optimization of grinding circuits, physical separation (gravimetric, magnetic and electrostatic), flotation, physico-chemical techniques of extractive metallurgy and recovery of metals, mineralogical characterization as well as agglomeration and thermal treatment processes of ores.