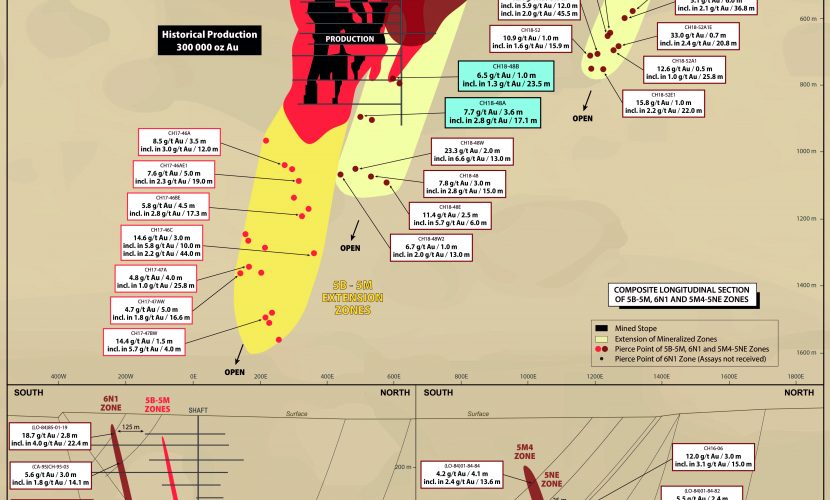 An intersection grading 6.5 g/t Au over 1.0 m included within a broader section of 23.5 m grading 1.3 g/t Au, were also obtained within Zone 6N1. The new results, which are situated at a depth of 800 m, are in addition to other mineralized intersections recently reported by Cartier (FIGURE) and within a 150-m radius of the new results. The potential of Zone 6N1 is open in all directions. Zone 6N1 is located only 125 m from the underground infrastructures (FIGURE).

« Current Phase III drilling is focussed peripheral to Zones 5NE, 5M4 and 6N1 where recent results from Zones 5M4 and 5NE are amongst the best grades over lengths drill hole intersections by Cartier on the project » commented Philippe Cloutier, President and CEO.

Lengths are expressed along drill core axis.  The true thickness was not determined. The Company is currently building wireframes for the 24 mineralized zones and existing infrastructure of the former Chimo Mine in order to determine the dimensions of each mineralized zone as accurately as possible.

Current Phase III drilling is focussed on expanding the dimensions of gold-bearing Zones 5NE, 5M4 and 6N1 as they are proximal to existing mine infrastructures.